Windows XP SP3 and Office 2003 will go out of support on April 8, 2014 (see the Microsoft announcement here) so what does this mean for you ?Well nothing if you don’t have any PC’s or Laptops still running either of them ! However many businesses still have many PCs that do. 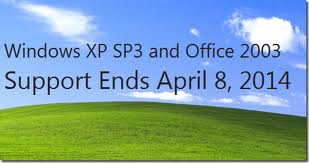 So what does that mean ? Well from that date there will be no new security updates, non-security hotfixes, free or paid assisted support options or online technical content updates.

In practical terms this does not mean they will stop working its just that Microsoft wont issue updates for them anymore. This includes liaising with the security software providers like ESET to help them stop Viruses for XP. PCs running XP will become very vulnerable from a security point of view re malware and spyware that its easy to pick up from email and web pages. Even if you have probably the best security software on the market (such as ESET) which will protect you to some degree a ‘supported’ Operating system is the key element of good security.Recently Microsoft have partially relented and will continue with limited updates until 2015 which will help stave off the worst threats.

Unfortunately this will still leave you more vulnerable re security attacks.As 30% of the World’s PCs still run XP this is a great opportunity for cyber criminals so I would guess we will see a big rise in Viruses and other Security threats specifically written to exploit the new vulnerabilities in XP.

So it will  expose your company to potential risks, such as:

Security & Compliance Risks: Unsupported and unpatched environments are vulnerable to security risks. This may result in an officially recognized control failure by an internal or external audit body, leading to suspension of certifications, and/or public notification of the organization’s inability to maintain its systems and customer information.

Lack of Independent Software Vendor (ISV) & Hardware Manufacturers support: A recent industry report from Gartner Research suggests “many independent software vendors (ISVs) are unlikely to support new versions of applications on Windows XP in 2011; in 2012, it will become common.” And it may stifle access to hardware innovation: Gartner Research further notes that in 2012, most PC hardware manufacturers will stop supporting Windows XP on the majority of their new PC models.

So  what should you do ?

Unfortunately there is nothing much you can do except replace or upgrade your PCs. Realistically a new PC is going to be the best option .

Get in touch here if you need any help or advice.